The Origin of the Serif: Capitalis Romana with Flat Brush

Basic study and practice of the Maiuscola Romana Monumentalis — from the base of the Trajan Column in Rome - which has remained intact for more than 2000 years. Without a doubt the most solemn and fascinating of all letters, but also the foundation of all writing styles that continues to influence the contemporary type design.

Particular attention will be paid to the study of the proportions and how to build each letter.

After this introduction, the Roman Letter will be transformed and reinterpreted in more modern and freer ways while maintaining its essential characteristics of beauty and proportion.

In the course we will also learn how to use a flat brush for the writing of write letters and calligraphy on any type of surface: walls, wood, glass, etc. 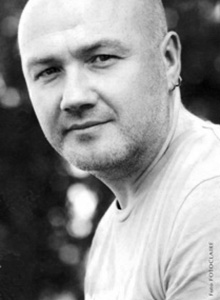 Based in Turin, Italy, Massimo Polello has worked as a calligrapher artist for over a decade. Since studying calligraphy at the Toulouse Scriptorium and studied with numerous calligraphers and internationally recognized master penmen, he has explored its classical and contemporary applications. These include designing packaging and signage logos for companies, museums and individuals, as well as applying his designs to walls.

He published “Traité de la peinture-Extraits” with Editions Alternatives Publisher-Paris and worked with artist and film-maker as Peter Greenaway in “Peopling the Palace” and with the director Luca Ronconi to the installation of the of 150th Anniversary exhibition of the Unification of Italy, "La Bella Italia".

He is the President of Turin calligraphers´ guild “Dal Segno alla Scrittura” and owner of Studio Gallery ABC_Atelier and collaborated with the Medicea Laurenziana Library in Florence.

He sums up his approach to calligraphy best, “…letters become a means to exist outside myself… going beyond the letters, captured by a sole need to see. They become signs, images, evocations, urgent needs, emotions.”