This workshop aims to introduce font designers to DecoType design concepts. As a basic introduction the participants will be walked through the process of converting an existing Arabic typeface into the DecoType format. The resulting font will have full Unicode support as well as shape variation and is ready to work inside Tasmeem with all the extra controls that that entails.

Participants benefit best if their computers are set up with FontLab Studio. Registered participants will be invited to join DropBox, where the templates and additional manuals will be downloadable.

Please download and study the manual by Titus Nemeth:
A primer for Arabic typeface design for the DecoType Arabic Calligraphic Engine in WinSoft Tasmeem 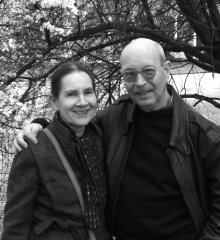 Thomas Milo is an independent scholar with a background in Slavic, Turkic and Arabic studies. Together with Mirjam Somers and Peter Somers he is partner in DecoType – linguistic experts & designers of computer typography – a team that has been working on Arabic script technology since 1982. They pioneered the concept of Dynamic Font (Smart Font, Intelligent Font), a key aspect of all modern computer typography.

Together with Mirjam Somers he conceived and created the first dynamic Ruq`ah typeface that in the early 1990s was integrated in Microsoft Office. At the time it had to take the form of an OLE server, as there were not yet provisions for smart font technology in Windows or any other OS.

Tom is one of the brains behind the Tasmeem plug-in for InDesign. In 2009 he received on behalf of DecoType the Dr. Peter Karow Award in recognition of his fundamental contribution for computer typography.

Mirjam Somers was educated at St Joost Art Academy in Breda, the Netherlands, where she had lessons of the calligraphers Chris Brand and Jan van den Bouwhuysen. After two years she continued at the Gerrit Rietveld Academy in Amsterdam and graduated there in 1974 in Architectural Design.

Having worked as a carpenter and free-lance typographer she encountered Arabic script in 1982 when together with Thomas Milo she designed and produced the Arabic Letter Box, a wooden prototype of a computer program and an educational tool at once. With Tom she reduced the traditional Arabic Ruqah script to 70 penstrokes and defined a mechanism to generate all and any letter combinations correctly: the smart font algorithm. The combination of the font-in-the-box and the out-of-the-box font inspired Peter Somers to write revolutionary smart font program code. Only after this first feat Peter, Mirjam and Thomas incorporated DecoType in 1985 – Designers of Computer-aided Typography.